Space-﻿based ADS-﻿B: what is the potential for US air traffic management?

A little more than a century after the first-﻿ever machine-﻿powered flight, it seems the next big aviation innovation may come from beyond the sky. Andrew Tunnicliffe talks with Aireon about how transformative space-﻿based ADS-﻿B is proving to be in airspace management.

Those are not the words of a developer looking to push its technologies, but of the US Federal Aviation Authority (FAA), and likely reflect the view of air navigation services providers (ANSPs) around the world.

ADS-B has been used for a few years now, to varying degrees, by ANSPs. Whilst it has been largely successful, it also has its limitations. Transponders send out information that is relayed to air traffic controllers (ATC) via a network of ground-based towers.

“The US has deployed 635 plus towers around continental US, Alaska and Hawaii to get this information. But, like radar, there is a significant amount of airspace uncovered,” says Aireon CEO Don Thorma, who adds that analysis has shown that over 70% of the world is uncovered by ground-based radar or ADS-B collectively.

“That [lack of coverage] really opened up the potential for a system like Aireon. By putting this on a network of satellites, we’re able to provide 100% full global coverage with a dataset.”

Why is ADS-B the next big thing?

Both ground and space-based ADS-B – more precisely ADS-B Out – provide critical data to ATCs about an aircraft either in the air or on the ground.

Unlike radar, it furnishes ATCs with global positioning system capabilities along with information on the type of aircraft, its flight number and speed. However, it also alerts controllers to the aircraft’s movements, showing whether it is turning, climbing or descending.

Space-﻿based ADS-﻿B has the potential to facilitate the next generation of ATC tools.

“It's basically the next generation surveillance technology deployed by ANSPs that moves away from a well-used technology [radar]” says Thorma. ADS-B Out transmits information whilst the ADS-B In transponder – the next level up – allows aircraft to receive data from others, leading to what developers say is safer, more efficient air travel.

Space-based ADS-B provides the same capabilities as its ground-based counterparts, but has the potential to facilitate the next generation of ATC tools. Aircraft fitted with the transponders automatically send their position data to the Iridium NEXT 66-satellite constellation before being sent back to earth and on to the subscribing ANSP.

The FAA moves to modernise airspace

In 2010, the FAA ruled that by the beginning of the next decade, all aircraft operating in its airspace should be fitted with ADS-B Out. On 1 January 2020, that requirement became mandatory, aligning the US with others that had already brought in the requirements or were in the process of doing so.

Aireon, the founder of space-based ADS-B in 2019, has embarked on a partnership with the FAA to evaluate the wider role that ADS-B can play across the FAA’s entire air traffic management remit.

“There are well over 20 different organisations within the FAA that are using the data to understand how we can support this broader mission,” says Thorma.

Together we are shaping a more modern, resilient and secure National Airspace System.

The partnership includes a trial of space-based ADS-B in US airspace and access to Aireon’s global datasets to see how they can be used in airspace safety and accident investigation data analysis, airport surface applications, search and rescue, air traffic management support, remote situational awareness and commercial space.

The agency has been looking to modernise the sector as part of what it calls the Next Generation Air Transportation System (NextGen) initiative.

Suggesting it is one of the “most ambitious” infrastructure projects in US history, at the beginning of 2021 it said: “Rather than simply making minor upgrades to ageing infrastructure, FAA and its partners are implementing major new technologies and capabilities.

“Together we are shaping a more modern, resilient and secure National Airspace System to more efficiently serve more than 2.7 million passengers and 44,000 flights per day.”

It added that NextGen encompasses innovative and transformative technologies that are being developed and deployed after thorough safety testing through a series of innovations across communications, navigation and surveillance. 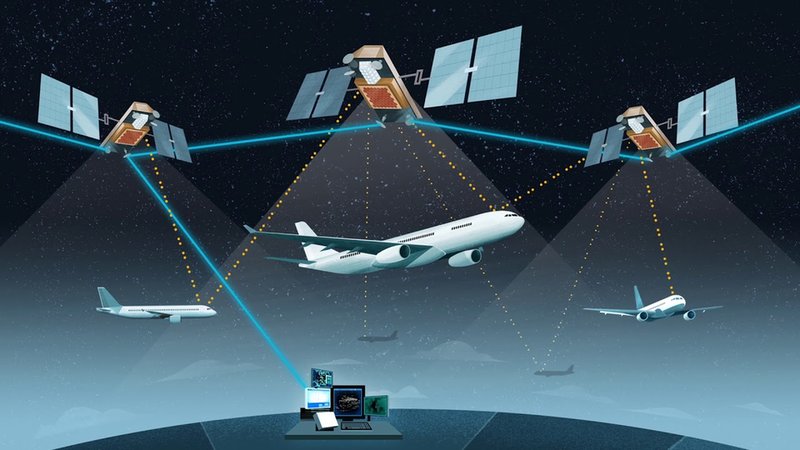 Thorma says that the introduction of space-based ADS-B is “clearly an important part” of the FAA’s airspace modernisation. In total, the FAA is estimated to oversee 17% of the world’s airspace, much of it remote, mountainous or oceanic.

Although ADS-B has been in operation for a while, because it has been ground based, issues similar to those associated with radar have persisted – particularly in oceanic and remote airspace environments.

Thorma says that space-based ADS-B fills those gaps: “This system looks at optimisation, from take-off to landing – gate-to-gate… It fills the gaps both from an oceanic perspective, but also where they don't have surveillance capabilities.”

He says that there are a lot of remote airports and airspace where systems like space-based ADS-B can give a “complete picture” that allows ANSPs to further optimise the airspace.

“Aviation is a system of systems,” he continues. “Space-based ADS-B is a component of that, which adds a new capability that fits with the rest of the system in the oceanic and remote environment, as well as adding an additional layer of resiliency in terrestrial environments.”

This system looks at optimisation, from take-﻿off to landing.

The FAA has previously said that it believes ADS-B improves safety and efficiency in the air and on runways, reduces costs and lessens harmful effects on the environment.

It adds that general aviation is safer with the application of ADS-B and the traffic, weather and general flight information it currently provides free of charge. Further services will be coming online as the technology develops.

Although the FAA’s requirement is currently to have ADS-B Out on all aircraft, the majority of aircraft manufacturers will likely have opted for ADS-B In. Having spent billions on upgrading their fleets in recent years, many airlines now have this technology.

ADS-B In will allow operators to reduce their fuel consumption and operate more safely, particularly thanks to direct aircraft-to-aircraft applications.

In addition to traffic, weather and general information ADS-B assists pilots with interval management, assisted visual separation and trial procedures. As well as the obvious benefits to ATCs, they also have access to enhanced airport surface surveillance and wide-area multilateration (WAM), which has the potential to be deployed in space.

Via its network of sensors, WAM locates aircraft even in the most challenging environments. Through the data it provides, ATCs can improve airspace management, safety and efficiency whilst reducing delays, cancellations and airport diversions.

In 2020 Aireon signed a ten-year agreement with Eurocontrol to integrate its data into the enhanced tactical flow management across its 4.4 million square miles of airspace. The company has numerous other partners, including the Airports Authority of India, where it has been integrating its technologies across Mumbai, Chennai and Kolkata oceanic airspace.

It's really exciting to see how these technologies are fuelling the next wave of improvements in the aviation industry.

The race is on to develop, innovate and move forward in space, ultimately heralding the next generation of air travel. Thorma cannot hide his delight at the role his organisation is playing.

“It's really exciting to see how the merits of these space-based technologies, aviation technologies and big data analytics are fuelling the next wave of improvements in the aviation industry. We're happy to [bring] part of that into our capability,” he adds.

Speaking of the work thus far with the FAA, he says that the ongoing trial has already helped identify potential issues and solutions. He concludes: “This is definitely going to add substantial benefits from a safety [perspective, as well as] resiliency and augmentation for the airlines and in that region.”

The trial should be completed by the second half of 2021 before the technology moves into operational implementation.