Flying in formation: inside the Airbus fello’fly project

Airbus’s fello’fly project is working to apply the principle of wake-energy retrieval to commercial aviation, a move that could help reduce carbon emissions by 5%-﻿10%. Demonstrator leader Nick MacDonald tells Adele Berti about the idea and next steps towards implementation.

From Leonardo da Vinci to the Wright brothers, scientists have been observing birds’ flying techniques and using them to implement game-changing innovations in commercial aviation.

This is what a team at European aerospace corporation Airbus is trying to do once again, having found inspiration in migratory flocks.

Much like geese and cranes, they believe that groups of aircraft could fly in a V-shaped formation to recreate the principle of wake-energy retrieval used by migratory birds. This, they say, could result in a reduction of between three and four million tonnes of carbon emissions a year.

Airbus is currently testing the viability of this model as part of a project called fello’fly. The initiative involves air traffic controllers, airlines, navigation providers and lawmakers, and could enter into service within the next five years.

“If you look in nature, there are big birds like geese that fly in a V-shaped formation for their inter-continental migration,” explains fello’fly demonstrator leader Nick MacDonald.

“Over recent decades scientists have figured that they do that because the bird in the front creates a wake in the end, [generating] a vortex in the air, and then the bird behind just flaps its wings in synchronisation.”

This is known as the principle of wake-energy retrieval, allowing birds to reduce their flying efforts during their long migratory journeys.

The two vortices that are created as each aircraft flies are powerful, horizontal columns of air

Airbus has been testing its potential in aviation since 2016, when it flew an A380 aircraft as leader and an A350 as its follower, keeping them 3km apart. “The two vortices that are created as each aircraft flies are powerful, horizontal columns of air, and around that energetic air there's an updraft of air that's just coming up,” he says. “If you position an A350 aircraft within that stable updraft of air you can reduce your engine setting, and therefore save fuel and emissions as a result.”

The 2016 tests showed potential for between 5% and 10% of carbon reductions, persuading Airbus to launch the fello’fly project and reach out to aviation partners for further developments. 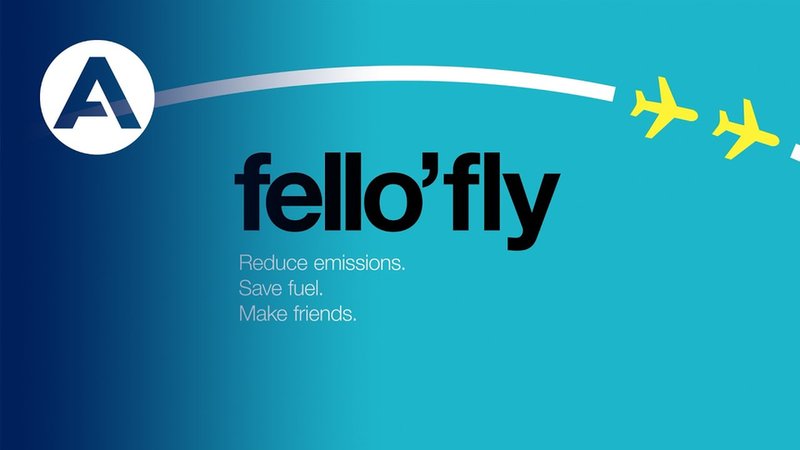 A demonstration video from Airbus on the fello’fly concept. Credit: Airbus

Having successfully tested a model in 2016, Airbus is now looking at the next phase of fello’fly, which is focused on testing its feasibility. From a technical standpoint, this means integrating fello’fly into pilot systems, making sure it has a working interface that allows pilots to safely track the updraft and putting the aircraft in the optimal fuel-saving position.

“The fuel burn saving depends on the combination of aircraft, so not all [types of aircraft] would be paired together because they have different cruise maximum speeds and cruise altitudes,” says MacDonald. “So we've taken all that into account and have managed to model and understand what the potential market is and how that would work.”

Another crucial part of the project is testing the safety implications of keeping aircraft closer together than they are currently. In today’s traditional ocean airspace, two aircraft must stay between 30 and 50 nautical miles away from each other. However, fello’fly bids to reduce this to 1.5 nautical miles, while increasing the vertical distance between the two by tenfold.

The fuel burn saving depends on the combination of aircraft

Having met at a specific clearance point, they would have to maintain this so-called ‘rendezvous’ position for most of their long-haul flight, before then separating to reach their destinations.

When it comes to implementation, collaborations with other players in the industry will be paramount. “We have to show that [fello’fly] can be integrated into airlines, air traffic management systems and air navigation service providers (ANSPs),” he adds. These include British navigation provider NATS and its European and French equivalents EUROCONTROL and Direction des Services de la Navigation Aérienne, as well as Frenchbee and SAS Scandinavian Airlines.

These collaborations are currently focusing on practical challenges, such as adapting regulation and pairing different aircraft models. “We need the regulations to change,” he comments. “We need the ANSPs to adapt their system and to work with them to understand if is there additional training that air traffic controllers would require and changes in procedures.”

Next steps towards achieving fello’fly

Nearly five years after the first tests with the A380 and A350, Airbus is aiming to carry out a new live airspace demonstration in the Atlantic in 2021. To meet this target, the team is currently trialling pilot assistance technology, which will help guarantee safety standards when the two aircraft are flying close to each other.

“[During the 2021 trial] we can show that we have a technical feasibility that's proven, pairing two flight test aircraft together and also working with our airline and air traffic management partners in order to show that it's possible,” comments MacDonald.

There's a wide recognition across the industry that we have a responsibility, collectively, to reduce emissions

Depending on the outcome of the trial, Airbus is hoping for the fello’fly method to enter service by 2025. “This project could make an emissions and environmental impact within the medium or even short term [by] bringing something into service over the coming years that could reduce the environmental footprint of long-haul aircraft by 5% to 10% per trip,” he adds.

Because of the swift changes it promises, Airbus is hoping that more and more industry players will get on board with the fello’fly project as time goes by.

“There's a wide recognition across the industry that we have a responsibility, collectively, to reduce emissions,” he concludes. “That's not just Airbus, but it’s also collaborating with airline customers [and] working with the air traffic management community and rulemaking entities such as the International Civil Aviation Organization.”