Inside the first-﻿ever drone landing at a commercial airport

By landing an unmanned aerial vehicle (UAV) in a civilian airport for the first time, the Israel Aerospace Industry (IAI) has broken a record in the field of unmanned aircraft systems. Ilaria Grasso Macola speaks to IAI director of marketing and sales Eitan Arad to understand how the project came about and what this means for the future of UAVs.

The aircraft was the first UAV to land in an international civilian airport, thereby occupying the same air space as passenger jets.

IAI’s Heron aircraft took off from a landing pad in the kibbutz of Ein Shemer, located in northern Israel, and flew south for 65km, landing at Ben Gurion Airport before flying back to the landing pad.

The launch was a success, with IAI defining it as a “great achievement in the UAV arena”.

“IAI's Heron UAV made a significant breakthrough today, landing for the first time at an international airport,” commented IAI executive vice-president Moshe Levy. “The future of the world of aviation will need to allow unmanned aerial vehicles to land at civilian airports, and today this happened for the first time thanks to the hard and joint work of the Civil Aviation Authority of Israel and the Israel Airports Authority.

We spoke to IAI director of marketing and sales Eitan Arad to talk about how the project came about, what happened on the day of the launch and what the future will bring for UAVs in airport environments.

Ilaria Grasso Macola: When and how did IAI start developing UAVs?

Eitan Arad: IAI is the largest defence company in Israel and we are a global pioneer of unmanned aircraft system operations. We were the first in the world [when we developed] two of the first UAV ever at the end of the 1970s.

During the 1973 War (which was fought between Israel and a coalition formed by Egypt and Syria), we had a lack of real-time intelligence, but we decided to use the knowledge we had into building a UAV.

The first model was named Scout and operated tremendously well in the first Lebanon War (which took place in 1982, when the Israeli Defence Forces invaded southern Lebanon), tracking target tanks and everything they were supporting. From then, we developed a second generation, which was renamed the Searcher and it was a much bigger UAV, mainly in operation during the 1980s and 1990s.

When did you start working on the Heron UAV?

In the last 15 years, we developed the Heron family, which are more mature and capable UAVs. First, they're bigger and can stay up in the air for more than 24 hours at high altitudes.

They're also multisensory - which means that you can hang cameras onto them - and can take over versatile missions, such as supporting military forces on the ground. Right now, we have more than 20 countries currently using Heron for operational and paramilitary missions.

Heron is the first UAV to land in an international airport alongside commercial flights. Can you tell us what happened on the day?

Before we used to need all equipment on site, not only the aeroplane but also the ground control station and the antenna.

This time the aeroplane automatically landed at Ben Gurion in a non-segregated space, did an automatic reverse and took off to another mission while the ground control station was hundreds of kilometres away.

The aeroplane is unique also in the sense that you don't need special technicians to refuel, it just needs someone with a tank to fuel it. 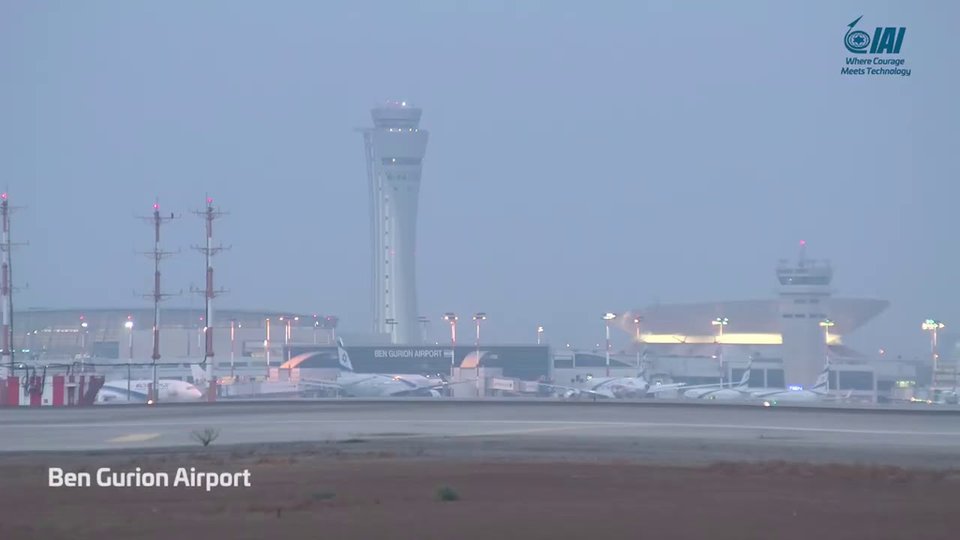 During the launch, were there any problems you faced?

Everything went smoothly, and the aeroplane performed accurately. Of course, it was monitored but our automation technology is very accurate and has been used for quite a while on every Heron platform.

Why is it important for UAVs to share air space with civilian aircraft?

First, it gives more flexibility. One of the weaknesses of UAVs is the length of flights, as the aircraft can only fly quite slowly. If [we] work with civilian or semi-civilian aeroplanes, we can get advantages out of each other, especially when you are flying.

Also, when you're flying over cities, a lot of the challenges [that come up], such as error activities or natural disasters, can be supported by UAVs. You need to fly UAVs above civilian areas, making sure it will be safe. [Sharing airspace] has a lot of advantages in terms of being able to show the right safety cases, not only in areas of engagement.

In your opinion, will we see an increase in UAVs sharing civilian air space in the future?

Although there is no global regulation right now, countries have their own authority bodies that decide what to do, but I do believe that there will be one regulation.

Because the missions right now are not only military, we need to be able to perform as we are doing right now for instance with Heron in Europe, where Heron UAVs are coordinated by countries' own aviation authorities.

The challenge [of having global regulations] is there, but this is where the world of UAVs is going.