A team of researchers has successfully trialled a four-wheel robot capable of carrying out structural inspections on aircraft. The robot, which was tested at Cranfield University, can stick to and move around the sides and underbelly of an aircraft, as it hopes to revolutionise and automate aircraft maintenance. Adele Berti reviews the technology

Aircraft maintenance is a time-consuming procedure that takes up about 20% of total operating costs and, being usually done manually, is subject to human error.

Yet repair and inspection operations may soon become automated, thanks to the latest work carried under the CompInnova project, a European scheme that focuses on emerging technologies.

Promoted by the European Commission, the CompInnova initiative is funded by the EU’s H2020 Framework Programme and coordinated by UK-based Cranfield University in collaboration with four other partners.

Within this framework, researchers from the Luleå University of Technology participating in the initiative have recently developed a four-wheel robot capable of moving around the surface of a plane carrying out structural inspection.

With a little more than a year left before its official release, the prototype robot, called Vortex Robot, was successfully trialled on Cranfield University’s Boeing 737 aircraft in February. 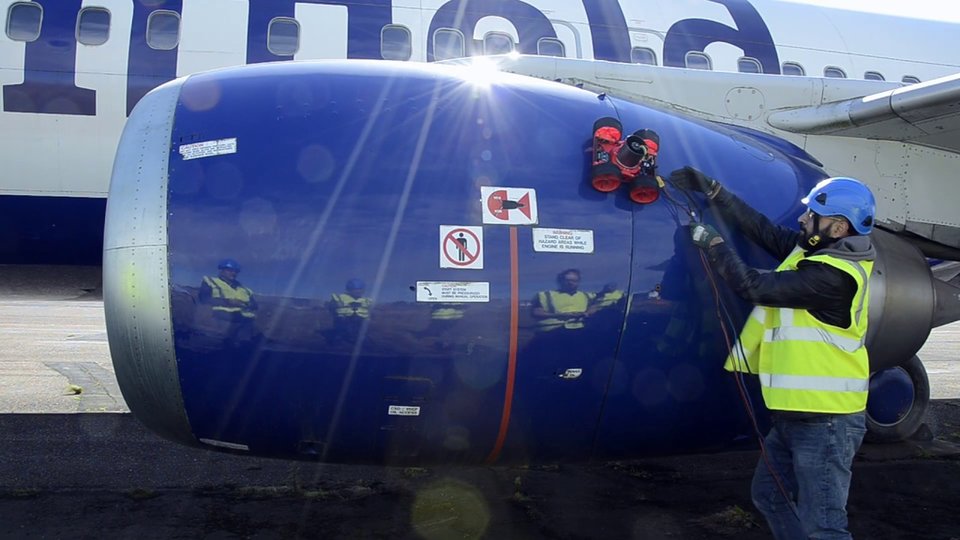 According to Joao Raposo, international project manager at Cranfield University, the concept of the project is to develop a comparative strategy for inspecting and repairing composite materials in aircrafts. “The goal is to automate as much as possible the parts (of maintenance procedures) that require the least technical skills”, he says.

The Vortex Robot does just that. Equipped with force sensors that can measure adhesion and controlled motorised wheels, the machine uses intense suction to climb the outside of the aircraft to detect damaged composites.

The platform also features a number of inspecting technologies that allow it to gather information on the state of the aircraft while moving around it.

Developers have also equipped it with an ultrasonic sensor – allowing in-depth characterisation of the types of damage the aircraft has – and infrared thermography.

“The idea is to have a first high-level inspection of the aircraft using the infrared thermography,” says Cranfield lecturer Luca Zanotti Fragonara, “and then we will use the robot again to inspect it in detail with the ultrasonic sensor.”

The technology will then be able to create a digital twin version of the aircraft registered in a database through which staff will be able to find and sort the damages.

Having successfully tested the inspection robot, the CompInnova team is now working to complete the development of an autonomous version of the robot, called a ‘manipulator’, with integrated repair capabilities.

Designed to inspect planes undergoing long-term periodic checks, the manipulator is connected to the aircraft fuselage through suction caps, instead of wheels, that help reduce its power consumption.

Over the next few months, Cranfield’s partner University of Patras will be working to optimise a laser removal procedure to install on the robot, which, Zanotti Fragonara explains, will remove the damaged composite material layer by layer.

“It’s almost like a surgical operation on the aircraft,” he says. “It will allow the robot to isolate the materials from the composite parts that are damaged and apply a patch to fix the damage.”

According to the researchers, the ultimate goal is for the different robots to work together and make maintenance and inspection more efficient and quicker.

“Overall, you will have a digitalised model of the aircraft where you can either continuously monitor the evolution of damage or, when necessary, operate and repair the damage.”

At this stage, human intervention is still quite important when it comes to repairing damaged composites, but, as Raposo puts it, “in the long term, we are hoping that the robots will fully replace the need for human intervention.”

In the long term, we are hoping that the robots will fully replace the need for human intervention