A new video released by London City shows impressive progress as the City Airport Development Programme gathers pace. Elliot Gardner catches up with the project to find out what the developers hope to achieve

nown for its convenience for visitors to and from the UK capital, London City Airport is the closest airport to central London. Situated at King George V dock, its location has made it incredibly popular for both business and leisure passengers. But being in such an enclosed space has its downsides - namely limits on the size of the facility.

Because of space limitations and just one, very short runway, large aircraft is not permitted to use the airport, which limits long-haul flight availability. The lack of space also means that London City Airport operates out of a relatively small terminal building. All of this hasn’t hampered the airport’s popularity, but has meant it’s becoming increasingly difficult to keep up with demand. When it was built, the current terminal building was designed for a maximum of around one million passengers a year, but nowadays the airport sees a yearly average of 4.5 million.

The City Airport Development Programme is a radical project looking to address these points, while overhauling almost every aspect of the airport’s infrastructure and facilities. The programme is scheduled for completion in 2022, with passengers expected to begin to see the benefits by 2021.

“If you look at London City Airport now, you'd probably ask 'but where are you going to build the infrastructure', and the answer is that for most of that we're essentially creating new land above the dock waters of King George V dock,” explains London City Airport senior PR manager Andrew Scott.

Eight new aircraft stands, new passenger facilities and a new parallel taxiway will be built for the airport, but due to the inherent space limitations associated with its location, a 75,000m2 concrete deck will be built over the waters of King George V dock, supported by over one thousand steel and concrete piles in the waters of the dock. The work amounts to the UK’s largest in-shore marine construction project.

“That concrete deck is equivalent to eleven football pitches and in order to build that we have to pile into the dock. That's the stage we're at at the minute, and at last count we had around 80 piles completed in the dock. But there will be a total over a thousand piles in total, around 1,100. It’s going to be a two-year project alone just to build the deck,” says Scott.

On top of the dock-side expansion, the project also includes a much tamer land-based expansion to the west of the existing terminal, which is also currently underway but is much smaller in scale.

Scott describes the process: “At present it’s mainly rerouting utilities and building a temporary immigration and passport control facility, and a temporary goods-in facility. We've got areas of the airport that we need to decommission in order to reconfigure and in the meantime we have to create replacement areas in order to complete those processes as normal. We're running an airport in parallel to this major project and that just means we have to be smart in the way that we phase the project.”

We're running an airport in parallel to this major project

An explosive development: the project’s challenges

The development project received an unwelcome surprise in February, when as part of a precautionary unexploded ordinance survey of King George V dock for the expansion project, divers found a 500kg World War II bomb. The airport was forced to close with all flights cancelled for two days as Royal Navy technicians and the Metropolitan Police worked to remove the explosive. The survey has continued since February and there have been no further bombs found.

“The way it works is that we’ve divided the areas of the dock into different sections. Out of five sections, four are clear,” explains Scott. “It hasn't stopped us from starting construction in those sections that are clear. The only section that remains is off at the eastern end of the runway, which doesn’t impact on our schedule. Yes it’s taking a little longer than we first anticipated, but the way that we phased that survey means we are currently building in the dock. So it’s had a fairly negligible effect on construction.”

While the ordnance survey has taken longer than City Airport originally anticipated, delivery partner on the project Bechtel were able to tweak their schedule to keep things on track. According to Scott, the biggest challenge for the airport is actually much more mundane than undiscovered explosives. 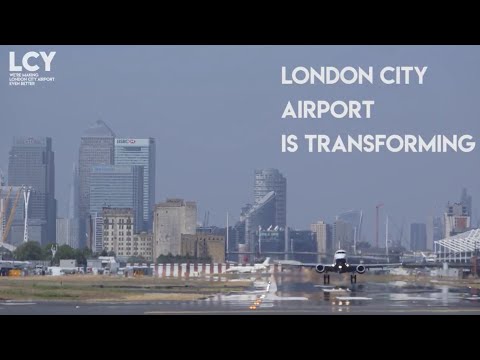 “The main challenge is doing a development of this scale while running an airport,” he says, “At the moment if you're arriving by DLR - as around 75% of our passengers do - you probably wouldn’t even notice that there was a development programme happening. It’s only really had an impact on those arriving by vehicle. But towards the end of 2019, that's when you'll start to notice if you arrive by DLR that areas might be temporarily sectioned off in order for us to carry out the required work.”

The airport’s brief to project managers is that the works should have as low an impact on passengers and operations as possible. The planned new departure gates will be introduced in a phased fashion, and the work on the parallel taxiway is taking place to the south of the existing runway so as to not interrupt runway procedures. City Airport is doing everything it can to ensure it expands efficiently, without jeopardising its reputation as London’s most convenient airport.